Some newer washing machines built by Whirlpool use a lid lock and latch to keep the lid from being able to be opened while the washer is in use.  This is a safety feature to keep someone from getting hurt if they were to open the lid while the washer was running.  Sometimes the lid lock can fail and cause the washer not to start.  The most common symptom that the lid lock has when it fails is the washer makes a clicking sound but it won’t start.  The lid lock can also fail if someone has forced the lid open while it was locked.  This lid lock assembly is used on some Whirlpool, Kenmore, Maytag, Amana, and Crosley washing machines.

First, unplug the washer before working on it.  Place a piece duct tape to secure the washer lid from opening.

Remove the two top 1/4″ screws from the left and right brackets on the back of the washer. Remove the two screws to the lid lock assembly. Remove the wire harness from the clip and depress the left and right console mounting clips by squeezing them from the underside. This will allow you to rotate the console backwards. Squeeze the two tabs to remove the wire harness from where it goes through the frame of the washer. Depress the two tabs on the wire connector to pull it out from the control board.  Remove the wire harness from the mounting clip. The lid lock & latch assembly is now free.  Take the old one out, and replace the new one in the reverse order.  Don’t forget to replace the included trim bezel at the same time. Where Can I Buy A Replacement Lid Lock?

You can buy a replacement lid lock assembly from our website.  Please click the link below.  Parts Dr always has the lowest prices for new O.E.M. replacement parts. 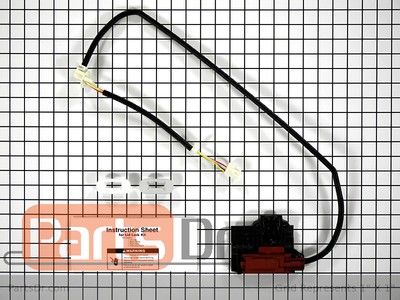